Can Tea Help Detox From Marijuana And Pass A Drug Test?

If you’re an avid marijuana smoker or maybe you’re taking it occasionally, chances are you have THC in your system and are looking for a reliable way to eliminate it and pass a drug test. Drinking tea is often considered a successful way to detox. Is this really true?

It’s clear that tea was regarded as a treasured elixir by most ancient cultures thanks to its numerous health benefits. Today, researchers have managed to shed light as to why tea had such a high reputation. Apart from reducing stress and boosting mental alertness, tea is effective in helping with many other health issues, such as lowering blood pressure and cholesterol, diabetes, preventing cancer, heart problems, and encouraging weight loss.

As for flushing out THC from the body, you cannot depend entirely on teas. Although some contain polyphenols, antioxidants, and small amounts of caffeine, they must work hand in hand with other remedies to ensure that THC is entirely flushed out before you appear for a drug test.

With that being said, this post will discuss many common teas that contain special detox properties that can flush out any THC compounds in the body to help you pass a marijuana drug test. 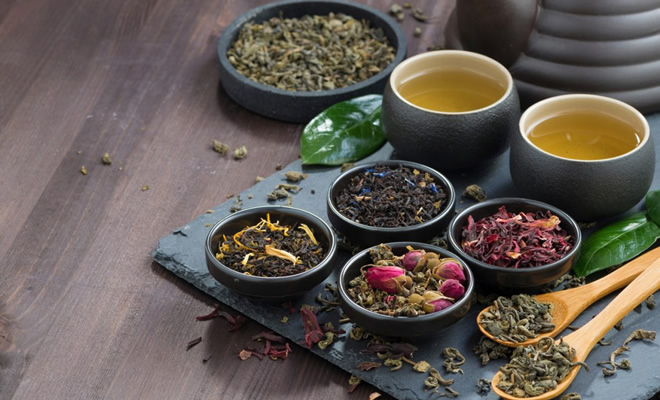 Although green tea has numerous health benefits, it does contain caffeine, which can cause severe side effects if consumed in high amounts. These include insomnia, nervousness, severe headache, irritability, and an irregular heartbeat.

Green tea is a great source of nutrients and antioxidants that give it its high detox properties. Since the liver desperately needs antioxidants to detoxify the body and eliminate THC, green tea will really help the process by providing the liver with needed antioxidants, leading to an increased metabolic rate.

During production, black tea leaves are oxidized in controlled temperatures to provide the color, aroma, and flavor that will help you enjoy a cup of hot tea every morning. Black tea has a high amount of polyphenols, antioxidants, and caffeine, making it the best tea for treating a number of health problems.

Being a rich source of vitamin A, B1, B6, C, and pantothenic acid, black tea has the power to protect the lungs and heart and lower LDL cholesterol for patients with a high risk of cardiovascular disease. Black tea also aids in preventing tooth decay, stimulating mental alertness, and reducing the ravages of aging.

Since black tea has a high caffeine content, its side effects may range from mild to severe. Among these (which result from consuming too much black tea) are vomiting, diarrhea, convulsions, headache, nervousness, dizziness, and an irregular heartbeat.

Since black tea is rich in protective antioxidant properties, it’s also believed to have detox properties that may aid in flushing out any traces of THC that might be present in the body after smoking weed.

White tea is made from the white buds of the plant, which usually undergo minimum oxidation compared with other teas. Just like green tea, white tea is believed to inhibit the oxidation process, which results in its numerous health benefits, such as preventing cancer, promoting weight loss, strengthening the heart, and reducing acne. If consumed in high quantities, white tea slightly reduces iron absorption.

Since white tea also has antioxidant properties, it does have limited detoxification ability that can aid in flushing traces of marijuana from your system.

Another type of tea that has really gained worldwide recognition because of its fresh aroma and soothing taste is mint tea. Made solely from peppermint leaves, mint tea is currently used for medicinal purposes or as a morning supplement when combined with other herbal ingredients.

Health benefits offered by mint tea include aiding in digestion, reducing flatulence, reducing headache and menstrual cramps, as well as unblocking breathing passages. Although mint tea is not as strong as other teas, only minimal side effects can be expected. Some of these include nausea and decreased sperm production.

For detoxifying the body, mint tea also has some detox properties that help flush THC from your system.

Considered a traditional medicine for quite a long time, ginger root tea is derived from ginger, which is a flowering plant native to Southeast Asia. Following its high antioxidant, anti-inflammatory, antibacterial, antitumor, and relaxing properties, ginger root tea is considered highly salubrious.

Although ginger root tea has many health benefits, drinking too much of it can result in stomach upset, heartburn, reduced blood pressure, and mild swelling or irritation in the tongue and lips.

Ginger is popularly used in cleansing programs because of its detoxifying properties and anti-inflammatory and antispasmodic effects. It has the ability to stimulate digestion, circulation, and sweating, which, in turn, aid in neutralizing acids and flushing waste and toxins from the body. This tea is recommended for marijuana detox.

Herbal teas are not true teas. They are derived from dried fruits, flowers, spices, and various herbs. Accordingly, these teas feature varying tastes and also have many health benefits that make them the best natural remedies for healing various ailments. The most common herbal teas available include:

This is one of the most popular herbal teas and has a high calming effect. The numerous health benefits of this tea include brightening your complexion, stabilizing blood sugar, boosting immunity, and promoting proper digestion. Among the side effects are vomiting, nausea, and drowsiness.

Dried chamomile flowers boiled with water have detox properties that help detoxify the kidneys but are not particularly effective in removing THC from your system.

This herbal tea is native to South Africa. Hailed as being caffeine free, Rooibos tea has various health benefits, which include supporting bone health, treating diabetes, protecting the heart, and preventing certain cancers, such as pancreatic cancer.

Rooibos is a very safe herbal tea that comes with few if any side effects. According to research, the only notable side effects include an increase in liver enzymes and stimulation of the female hormone estrogen.

For eliminating THC from the body, Rooibos tea has detox properties that aid in detoxifying the liver, blood, lungs, and gallbladder. By mixing Rooibos tea with maple syrup and lemon juice, the resulting concoction (along with other detox agents) can help in flushing THC compounds from the body.

Another herbal tea that is believed to have a detox effect is red clover tea. Hailed for its high antioxidant properties, this tea has the ability to give the body the necessary boost required to flush any THC compounds.

Among the health benefits of red clover tea are preventing cancer and chronic skin diseases, lowering cholesterol, reducing whooping cough and asthma, as well as reducing breast pain and mastalgia.

This herbal tea is derived from the leaves of the coca plant, which is native to South America. Coca tea is a rich source of inulin, phytonutrients, vitamins (A, C, E, B2, and B6), and alkaloids.

If coca tea is not taken properly, it can cause various health issues, such as hypertension, worsen asthma and heart disease, and increase blood sugar levels.

Just like some herbal teas, coca tea also has detox properties that help flush certain toxins from the body, such as uric acid, but since coca tea is derived from the same plant that is used to produce cocaine, it is not safe to take this tea before a drug test, as it will lead to a false positive result for cocaine.

Apart from the teas already mentioned, a number of other herbal teas might be considered when planning to detoxify your body from marijuana. Some of these include burdock root tea, milk thistle tea, cayenne pepper tea, cilantro tea, and lemon balm tea.

Although most sources claim that teas have the power to detoxify marijuana from the body, they cannot really be effective without also using other remedies, such as THC detox drinks and kits.

The best detox kit you might consider is the Fast Marijuana Detox Kit which has been proven to be very effective in flushing THC metabolites from the body. Used for urine tests, this kit is supposed to be used at least 2 hours before the test. For best results, first drink about 20 ounces of water, wait for 20 minutes, and then drink the entire QCarbo Detox Drink and take the Super Boost Tabs. Be sure to drink a lot of cleansing tea before the test to increase the rate of urination, and verify the detox process at home with the included urine testing device.