Can You Fail A Drug Test If You Just Grow Marijuana?

The marijuana industry is wide and vast, ranging from marijuana consumers, budtenders, and trimmers to growers. With the legalization of this herb by most states in the U.S., more legal marijuana gardens have emerged in a bid to meet consumer demands.

As you all know, marijuana has to be harvested and trimmed, leaving us with the question of whether or not this is a risk for people who may be required to pass a drug test (as you’ll have to touch and smell the plant).

Since legal marijuana has turned into a multi-billion dollar industry in recent years, many people have started growing marijuana without necessarily consuming it. On the other hand, many people have found employment in this industry, such as trimming jobs and bud tending jobs.

But, are these people really in danger? Can you fail a marijuana drug test just by growing (touching and smelling) marijuana without necessarily consuming it? 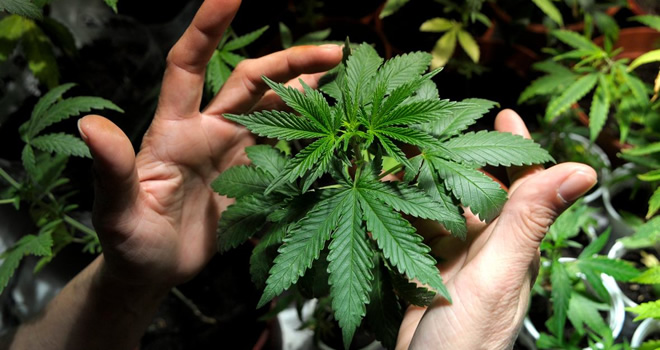 Why is this important?

It’s important to mention that you have to handle marijuana for quite a while to fail a marijuana drug test. Although absorbing THC into your system due to excessive handling is not significant, it may become more important if a drug test is given because of a court order, a surprise job outside of the industry becomes available, or if the test is related to a rehab program.

Although a person may have THC in their system for many reasons, only a few realize that by handling marijuana the chances are high for testing positive during a drug test.

Can someone fail a drug test after touching marijuana?

According to a recent study conducted in the University of Freiburg, Germany, 10 participants were ordered to roll one joint of marijuana per day for several days. After the study, these test subjects were ordered to submit their hair samples for analysis.

The purpose of this study was to prove that by simply breaking up cannabis, the residue on your fingers is enough to produce a false positive drug test. During the study, it was discovered that trace amounts of THC and THCA-A were detected in hair samples of all the participants, with a concentration range of 15–1800 pg/mg for THCA-A and 10–93 pg/mg for THC.

From this study, it’s evident that you can fail a hair drug test for up to a month after routinely touching marijuana for a while.

The study above was more of an eye opener for people who work in the cannabis industry and think they can’t fail a drug test since they don’t consume marijuana. It’s clear, though, that cannabis industry workers can absorb THC through their skin by simply handling too much marijuana.

Can you get high and fail a urine drug test by inhaling unburned marijuana?

THC resin is usually very sticky and can be absorbed, especially when you touch it daily.

Also, like any other substance, marijuana does vaporize, and the rate depends on fluctuations in room temperature. Under usual conditions, the concentration of cannabis vapor is quite low, although we can smell the aroma, and some regular marijuana users can even recognize different strains by their smell.

However, it is absolutely impossible to get high by just inhaling the aroma of marijuana.

When marijuana is in its raw unburned form, its THC exists in the acidic variation referred to as THCA, which does not cause any psychedelic effects. When heat is applied, however, THCA transforms into Delta-9-THC, which is responsible for the high.

In case you feel something after inhaling dry cannabis, it’s not the cannabinoids effect but rather the other substances called terpenes. The most popular types of terpenes you may come across both in the cannabis and food sectors include Linalool found in lavender, Limonene found in lemons, and thymol, anethole, and geraniol.

Inhaling the molecules of terpenes may only give you a relaxing feeling but will never make you high. Although you may notice some minor reactions, especially if you’re a beginner, they will likely be very mild.

How can you avoid failing a drug test if you work in the cannabis industry?

Just as we’ve seen in this post, handling marijuana can cause one to fail a hair drug test, so if you work in a marijuana business, you should wear protective equipment, such as hats, gloves, respirators, safety glasses, and other garments to protect yourself from THC resin. For indoor farmers, a grow tent and good ventilation are some of the must-haves to prevent THC dust from spreading inside the room.

Protective measures are also required because of some health risks from the hazards that come as a result of growing marijuana both indoors and outdoors. Some of these hazards include dangerous pesticides, mold spores, inhaling marijuana dust into your lungs, and exposing yourself to ultraviolet light from glow lights.