How Long Does Weed Stay in Your System?

There is no definite answer to this question, since no one can say exactly how long marijuana stays in your system. The length of time varies significantly from person to person.

How Marijuana Enters and Leaves Your Body

Marijuana contains over 400 chemical compounds called cannabinoids. One of them is tetrahydrocannabinolic acid (THCA) contained in fresh, undried plants. It is decarboxylated to delta-9-tetrahydrocannabinol (THC) when plants are dried, and especially when they are exposed to high temperature, such as when marijuana is smoked, vaped or cooked into edibles.

When you smoke, THC enters your body through respiratory tract, processed in lungs (or in stomach, if you eat edibles) and absorbed into the bloodstream, where it is carried to the brain and other organs. When getting to brain’s neurons, THC binds to the CB1 and CB2 receptors of your endocannabinoid system. This starts euphoric effects in your brain.

After reaching the liver, THC is metabolized into THC-COOH (11-nor-9-carboxy-Δ9-tetrahydrocannabinol), which is inactive substance. It goes to kidneys with bloodstream, from where it is excreted out of the body with urine. The withdrawal process may cause several symptoms, such as: cravings for marijuana, mood changes, irritability, anxiety, depression, headaches, sleep problems, diminished appetite and others.

THC is a lipid soluble substance. When its concentration in the blood is high, its molecules diffuse into fat cells, where they are stored for a long time. Later, when the concentration drops, they are gradually released back from the adipose tissues into the bloodstream. The time that this process takes is hardly predictable, it can be only estimated. It varies from a couple of days to one month and even longer. The main factors that influence it are the amount and frequency of marijuana use, potency of the strain smoked or THC dose in edible product consumed, metabolic rate and hydration rate of the user.

How to Determine the Time THC Stays in Your System


You can still determine your personal time by testing yourself. Buy a few home drug tests, stop smoking pot, and test yourself every day until you get a negative result. Doing this will show how long marijuana stays in your system, but do not forget that the length of time may also vary depending on various factors.


Yes, the method of consumption impacts at how long marijuana stays in your system. After smoking or vaping, the THC concentration in your body drops faster than after ingesting, because edibles must be digested in the stomach to enter your system, and this takes longer time than inhalation through the lungs. The difference, however, is not big. It can range from several hours to one day, but this time can be very important for those who need to pass a drug test on short notice.

How THC Is Detected in Your System


THC in the body of user can be detected using analysis of biological samples, such as urine, blood, saliva, etc. Urine test is the most common. It is a two stage process. In the initial test, enzyme-multiplied immunoassay technique (EMIT) is used. If it comes out positive, sensitive laboratory equipment used for gas chromatography–mass spectrometry (GC-MS) testing to confirm the result.

The initial test is considered positive if the level of THC-COOH in urine is above 50 nanograms per milliliter (ng/mL). This threshold is called cutoff level. In case of confirmation testing, it is set at 20 ng/mL.

How Long Can Weed Be Detected in Various Drug Tests?


Different methods are used to detect marijuana in the human body. You can check urine, hair, saliva, blood, or sweat, but the length of time that THC is present in all these substances after smoking varies significantly, so every drug testing method has a different time range for detecting marijuana.


How to Clean Your System from Marijuana and Reduce Detection Time


If marijuana stays in your system for a long time, removing it can be accelerated. For example, exercise and increased fluid intake are helpful, since these are among the main factors influencing the detox process, but these methods cannot be recommended for passing a urine test, since exercise releases toxins from fat into the bladder, thus temporarily increasing the level of THC metabolites in the urine, and excessive drinking makes urine look diluted, which leads to rejection of the sample.

If you need to prepare for a drug test, there are effective detox solutions available that will cleanse your system from marijuana upon short notice. For a hair test, detox shampoo must be used. For a saliva test, detox mouthwash is used, and detox drinks and pills are used for a urine test. 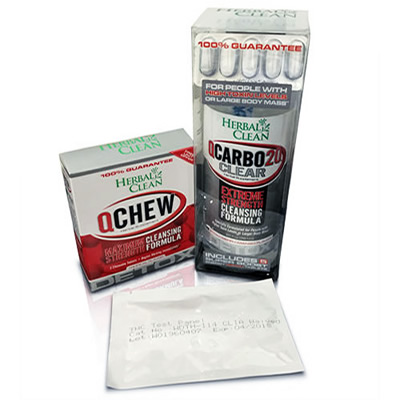 This best-selling detox kit will help you eliminate marijuana from your system and pass a drug test upon short notice. It includes the Herbal Clean QCarbo detox drink, QChew supplement, and a home THC test device to confirm the effectiveness of the cleansing process.

For more detailed information about how to pass a drug test and selecting the right method for your needs, please read the following articles: