What Drugs Show Up in a Urine Test and for How Long?

Urine screening is one of the most common methods used for detecting drug use and abuse. It is painless, cost-effective, easy to employ and can be used to test for all types of drugs whether illegal or prescription. This article will take a closer look at the drugs that may show up in a urine test and reveal how long they can remain traceable in your system. 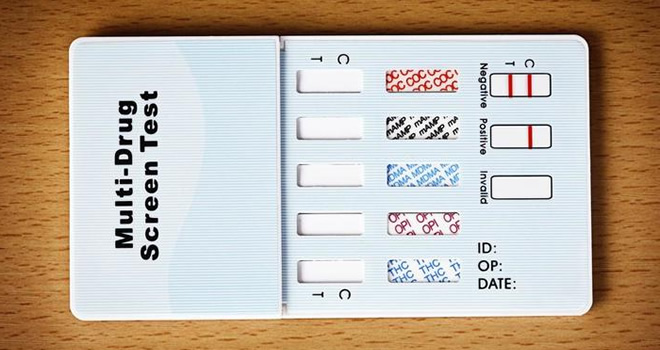 Drugs That May Show Up in a Urine Test

A urine drug test is one of the most effective ways to determine whether or not someone has abused drugs. The immunoassay test is used for an initial check. If the result is positive, a more precise test is used for confirmation—gas chromatography–mass spectrometry. These drug testing methods are able to detect all the most commonly used illicit substances, including some prescription drugs that can be abused.

Generally, you will be tested with a standard 5-panel test for so-called “street drugs”:

In some cases, testers may use a 9- or 10-panel drug test that includes most commonly abused prescription drugs, which are:

Alcohol testing may also be done during the process, but since alcohol has a short half-half, it may not show up in urine. In this case, an oral test might be the best alternative.

On rare occasions, you may be tested for some new designer drugs of abuse. In the end, the list of drugs that are being checked depends on the purpose of testing, the rules of the organisation that tests, and state and federal requirements or other guidelines that have been put into place.

A misconception about testing for a specific class of drugs is that the test will surely detect the entire line of drugs in that class. In fact, this is not always true. For example, most opioid tests cannot detect synthetic opioids, such as oxymorphone, oxycodone, fentanyl, meperidine; and most benzodiazepine tests are not accurate for detecting lorazepam. Urine tests that look for specific drugs instead of the entire class also exist, however, and can be used if necessary.

These synthetic opioids are mostly known by their trade names, such as Vicodin, OxyContin, Tylox, Norco, Lortab, Percocet, Numorphan, and Dilaudid, among others. Since these drugs are very similar to heroin, some people abuse them to get a euphoric effect that is similar to a high from heroin.

Even more drugs can be checked for drug testing in sports for professional and college-level athletes. Drug tests used in sports are aimed at detecting performance-enhancing substances and illegal recreational drugs, such as:

Detection Times of Drugs in Urine

Many variables affect how long a drug can show up in a urine test. Some of these variables include:

Because of these reasons, two people using the same drug can have different detection times.

Therefore, determining how long a certain drug is expected to stay in your body and remain detectable will be quite difficult, but general information is available, which is based on average data obtained from experience.

For instance, if you consider marijuana, the general detection time is as follows:

The following table shows the detection times of other common drugs.

Note that this table is just a general guideline. As mentioned before, many variables can affect the detection times of drugs in your system, as noted by Lab Corp and the Drugs of Abuse Reference Guide.

Drug testing has become quite common in most workplaces and schools and for sporting events. Since it’s difficult to predict how long it will take for a drug to be completely flushed out from your body, the most surefire way to pass a drug test is by not using illegal drugs.

In case you’ve already used drugs, however, and don't want them to show up in a urine test, drinking a lot of water so that you can urinate frequently would seem to be the best move. Detox drinks are also highly recommended, as they contain diuretics that help you urinate often and essential vitamins that help mask diluted urine with a yellow color to avoid suspicion.